Because some days it's not all 'Sunshine & Lollipops'...

Remember that other lifetime, before you were a parent?

You’d flick through baby magazines, imagining how it might be. Mentally casting yourself as the lead in the Johnson & Johnson baby bath commercial…

You imagined your Future Parent Self. Smiling, serene, refreshed. Dressed.

Everything would be washed and put away.

Squeaky-clean fridge bursting with greens that your kids would devour before clearing the table without a whiff of “It’s not my turn!”

Newly pregnant, you’d see parents in supermarket queues. They'd stand helplessly with a hotchpotch of groceries and a glazed expression. Baby bawling in the pram. Toddler running riot through the fruit section.

Every so often, they'd emit a faint signal along the lines of, ‘Johnny. Stop it. If I have to ask you one more time…’ while Johnny crashed the trolley through the self-serve like it’s a dodgem rink. 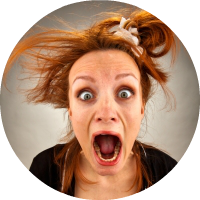 You felt for them. You really did. Then you thought this:

‘I’m going to do things differently…’

And here you are. Hotchpotch. Dodgems. If I have to ask you one more …

It’s not all the time, and not in exactly the same way, but there are enough similarities between how things were never going to be, and how things appear to be unfolding, that you’d quite like to go back and apologise for the rose-coloured glasses.

Because - as beautiful and joyful and rewarding and worth it as this is - parenting is harder than you thought.

The very same little people who have inched their way into every nook and cranny of your heart can drive you to tears in car parks. There are moments at 3am when you lie awake and want to scramble back all the words you said when you were at wits’ end. The corners you cut. The things you forgot. The time you wasted on Facebook while they sped through the months, and years…

Sometimes you want to wake your kids and apologise and hug them. Except that would be ludicrous! They’re fast asleep - peaceful, beautiful - and you can’t believe how lucky you are. A part of you wonders if you really deserve it. You worry that you’re messing it up. Messing them up. And that something will go wrong…

Nothing is ever finished. You’re never really on top of everything.

You have these priceless moments when it all just works. Everyone’s happy. Everyone's well. And you’re euphoric!

The very next day someone’s crawling with nits and there are ‘mean girls’ and the awards ceremony clashes with the company AGM and you’re floundering. Suddenly, you’re not juggling the balls in the air. You’re trying to scoop them up, one after another as they slip through your fingers.

Sometimes you pretend your heart isn’t thumping and the tears aren’t threatening because everyone else is doing a much better job.

Those parents who you’re comparing yourself to, who seem to know the secret? They don’t. They’re second-guessing too.

We’re all second-guessing. We're all in this together.

And then there are the times when our children shine. Times when we think, ‘I must be doing something right’.

My 15 Minutes for Parents is about celebrating that. It’s about tapping into those contented moments and building upon them.

It’s about stripping away the sense of ‘making mistakes’ and the ‘guilt’ and the ‘not good enough’ and guiding you to a place of self-acceptance and kindness. It’s about helping you see that it’s not just you - that what you see in other families is almost always their highlight reel, and that you have one too…

By building you up as a parent, the program helps you to build up your family. It’s about strengthening and pampering and re-framing and bonding - not by doing more, but by forgiving more (starting with ourselves).

It’s about setting new, realistic standards and expectations that will help rather than hinder. It’s about letting go of a whole lot of things, in order to gain a whole lot more.

It’s for parents whose harshest critics are themselves. Parents who love their children desperately, and wish they had more energy, more patience and a bucket-load of ‘chill out’.

It’s for every parent - regardless of confidence or experience - who has ever had a moment of doubt. It’s for anyone who is convinced that they’re screwing up this gig. It’s for parents who feel they’re doing pretty well, too - and want to cement that.

This program will help you to:

What this program is not:

If you think you’re doing okay, and you’d love to build on that…

If you want to deepen your relationship with yourself, your partner (even if you’re no longer together but co-parenting) and your kids…

If you’re looking for a new perspective and fresh ideas…

You’ll love My 15 Minutes for Parents.

How does the ‘My 15 Minutes’ Program work? 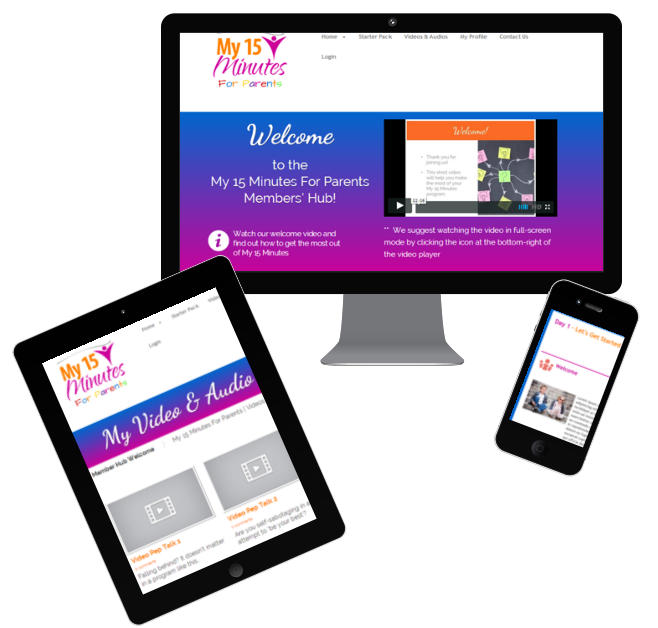 How we’ll deliver it:

Here’s what some
of our members
have said:

Ready to build your resilience as a parent?

My 15 Minutes For Parents

Join Now $67Plus GST in Australia

We've put together a great package for you. You can start the My 15 Minutes Life program at any time - just let us know when it suits you to kick off your 90 days!

Why our clients love it...

Here are just a few comments from our My 15 Minutes program members. Read more on our Testimonials page.

The My 15 Minutes program has re-awoken my passion for life. I didn't even realise that I had lost it amid the daily grind, but now I have so much more enthusiasm and energy. Beth Cavallari, Double Negative Photography

This program is amazing at reminding you how much is possible and it only takes 15 minutes at a time. It re-energised and re-ignited me as an individual set me on a new path of self discovery and self worth which benefits every aspect of my life. JL, My 15 Minutes member

Thanks so much!!! Some simple things that we forget, and the reminder that we need. And fantastic ideas we'd never think of. Loved the program! LK, My 15 Minutes member

Just wanted to thank Emma and Audrey for an exceptionally run program. Particularly your obvious commitment and dedication shown in your responses - both in speed and thoughtfulness. Your video today addressed a specific issue you had observed as opposed to a generic topic. Well done and thanks again. X" SP, My 15 Minutes member

We've each been running successful small businesses since 2009, and together we created the popular and life-changing My 15 Minutes program in 2013. What started as a simple idea is now evolving into a range of programs to meet the needs of busy people...at work and at home.

Find out all about the co-founders of My 15 Minutes, Emma Grey & Audrey Thomas on our About Us page.

Have a look at some comments and success stories from our clients on our Testimonials page. 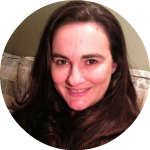 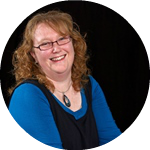 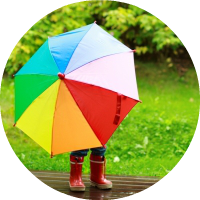 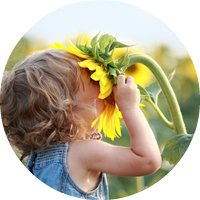 My 15 Minutes For Parents

Join Now $67Plus GST in Australia

We'd Love You To Join Us!

Like all things in life worth having, there is no guarantee this program will work for you. However, by following the program and really committing to making some changes, we are confident you’ll love My 15 Minutes For Parents.

We are proud to offer our 100% Happiness Guarantee – if after applying the tips and action steps during the first 7 days of the program, you’re not completely satisfied, your fees will be entirely refunded.

Still On The Fence?